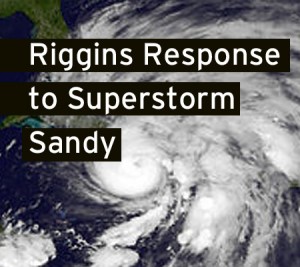 Riggins, like so many others in the region, was significantly affected by Superstorm Sandy.  The damage across the region was unprecedented, as was the impact on the petroleum industry.  Many petroleum refineries shut down operations because of damage to their infrastructure or lack of electrical power. The Colonial Pipeline, a main artery of crude oil from the Gulf of Mexico, also shut down during the storm. The combined effect was a significant petroleum supply shortage in affected areas of New Jersey and New York. Demand for fuel for emergency generators skyrocketed, as many critical infrastructure sites were without power for extended periods of time. Additionally, because the refineries and terminals close to the affected areas were also either damaged or without power, petroleum could primarily only be accessed in the Philadelphia and Delaware harbors.

As one of the largest suppliers of fuel for critical infrastructure in the region, Riggins had made significant investments into our emergency response plans prior to the storm.  This allowed us to survive the storm with minimal damage to our core operations.  This, combined with the size and scale of our fleet’s distribution network, allowed us to continuously access supplies of gasoline, diesel, and heating oil from ports throughout Delaware, Philadelphia, and New York. In the two weeks following Sandy, Riggins was able to access and distribute over 7 million gallons of fuel throughout the region. The top priority for the company during the response was to supply fuel to critical infrastructure providing basic services like water and sewer, as well as to essential elements of the emergency response effort like emergency generators at fire and police stations, hospitals, military bases, and communications towers. Riggins supplied over 1 million gallons of fuel to 680 critical government entities across the affected regions, and delivered over 5.5 million gallons of fuel to 1,300 gasoline service stations. The company experienced a 75% increase in call volume in the two weeks following the storm.

No Riggins customers went without fuel in the aftermath of the storm.  We heard from many of our customers that they were the only ones with access to fuel in their entire county.  Following the storm, Riggins has redoubled our efforts at helping our customers prepare for the unthinkable.  We now offer tank-loan programs that provide temporary above-ground tanks to customers so that they can fill their vehicles.  Riggins also issued an After-Action Report that disseminates our lessons learned from the storm, and makes recommendations for policymakers to prepare for future emergencies like Sandy.

Read the Full Report in the Link to PDF Article Below: